During the Edo period, Japan is suddenly invaded by alien creatures known as the "Amanto." Despite the samurai's attempts to combat the extraterrestrial menace, the Shogun soon realizes that their efforts are futile and decides to surrender. This marks the beginning of an uneasy agreement between the Shogunate and Amanto, one that results in a countrywide sword ban and the disappearance of the samurai spirit. 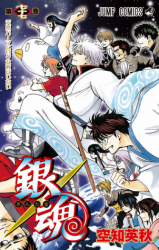