Lin Xiaoyou, childhood friend of Xi Yu, died at the age of 14, but her spirit refused to pass onto the afterlife. Instead, she stuck around and became Yu's "guardian angel" due to a promise she made to him. Under Xiaoyou's constant guarding, Yu hasn't had a single girlfriend even though he's already 24. Being in a proper relationship has become his goal in life, but such a simple wish brings about a series of terrifying incidents. Is Xiaoyou really a "guardian angel", or is she actually an "evil spirit"?! 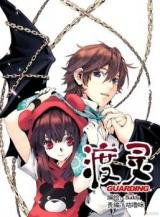